On this very special occasion, I allowed the girls to each choose one item from the crowded aisles of the Dollar Store to take home, where, incidentally, I was a little miffed that I did not receive a voter proxy regarding their enormous price hike from $1 to $2 dollars on several storewide items. We have tried this shopping strategy before and their selection usually starts with a rubber toy, covered in dangerous amounts of toxic paint, already missing an eye or requiring several obscure sized batteries. I don’t discourage their choice because inevitably, before swimming through the swarms of people, strollers and over-stuffed, loosely screwed baskets, they have already traded off for a sticker book or a picture frame in that same aisle. The next aisle is hair accessories so back goes the foam sword, the dinosaur eggs that never grow the way they promise when water is added and the new pick-up is a package of barrettes, though, when examined closely have at least two missing ribbons or a broken clasp. Fear not, we will soon be in the craft aisle and the girls will discover the scrapbooking labels, a container with the head of a coyote whose glowing red eyes would frighten most adults, those felt bottoms for chairs that they fight over who gets to affix to the kitchen table set when one starts to scrape the tile, sooner rather than later, because we bought them at this store in the first place.

In the end, I end up with my selection of stickers, a roll of Disney wrapping paper whose width is just enough to cover the spool it’s wrapped around and the girl’s selection of an orange pylon with the cast of High School musical dancing around the sleeve, $2. 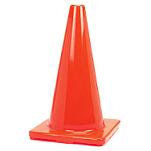 Their creative juices flowing in the car, they began to use the cone as a megaphone. I thought this exercise in thinking outside the box should be praised so I allowed the screaming, animal sounds and snoring in each other’s ears to continue for the duration of the ride home despite the decibel level rivalling that of a jet engine.

This morning when I wanted to wake up early, turn on my lap top, check my lottery numbers (of course) and try to get a little writing done, I was not disappointed to see my kids had already beaten me out into our family room, but I was a little sad to see they were already set up for an intense game of “ship” (the game that takes fourteen seconds to set up and several hours to tear down). The Dollar Store pylon, sometimes megaphone, sometimes arm sleeve, sometimes telescope, had become Ellie’s peg-leg while she scraped herself down the wooden floor hallway with her sockless foot wedged into the hole in the small end of the orange half-pant and she limped her way onto the bench to avoid another shark attack which could ultimately rob her of her other leg, requiring another trip back to….you guessed it. Pylon bursting at its cheaply made, plastic seam, I wondered if it would slice into her skin as she hobbled from her lookout post to her position of Captain on the lido deck. I will try to write a little later. For now, I best keep my feet out of the water.