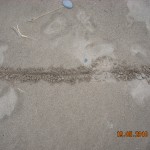 Going to a “cottage” isn’t what it used to be when I was a kid.

Hanna will have to learn the square root of pi some other day because yesterday, she was playing hooky. I too am taking a break from writing this book in exchange for sand up my rump and racoon-style sunburn.

We used to drive for what seemed like three days, six of us packed into one vehicle with everything we needed to get us through a weekend at a cottage. The buildings themselves usually smelled of mould, mildew and the lack of electricity. In other words, no t.v. and it was palatable.

We packed a picnic lunch in that very small vehicle, we fought in the backseat and smelled of tuna and egg salad sandwiches by the end of the very long journey. It is ironic that my husband made tuna sandwiches for that same group of people this past mother’s day and nobody would touch them because of the high mercury content, my how things have changed.

After arriving at a triangular shaped structure, I was either left with the bed directly under the dangerously sloped ceiling, in the top bunk of a room with another dangerously low ceiling or, I was lucky enough to sleep in the basement having crawled under what we referred to as a secret doorway in the floorboards but was actually some sort of trap door leading to a cement basement….probably where they used to bury the bodies.

I remember being told to leave the plastic wrap on the mattresses because others would be using them after we checked out so we had to keep things clean. We chose our blanket out of a box in the only bedroom closet that smelled of dirty socks and sometimes had spider webs binding them together.

We swam in a lake with sharp rocks underfoot and kept a salt shaker in the car to remove the leeches from our skin which we dealt with when the hypothermia began to set in.

All four kids bathed together and certainly not nightly. My mother told us that we couldn’t use any more than one teaspoon of hot water in our bath because “we were on a well.” To this day, I still don’t understand what she meant. My home is on a well and I use as much hot water as I want….sometimes by the tablespoon.

Today, we wouldn’t dream of going for a day at the lake without wireless internet access. We drive in our large mini-van with “stow and go” so nobody has to fight for leg or bum room. Kids have DVD players to keep them from having to talk, be creative, play games or sing songs. It is the grandest of all the caravans.

There are fourteen Tim Horton’s drive-thrus and two Starbucks en route and a plug in cooler with enough profiteroles and foie gras for the masses.

The outdoor shower is a hilarious add-on to the three, four piece bathroom, four bedroom house.

Other cottagers come by to discuss what shade of granite counter top would best reflect their new wall-mount t.v.’s.

The kids only have to miss as much television as the time it takes them to unbuckle and ride an ATV to the French doors. Exercise will not be interrupting their fun day at the lake.

I may get some writing done up here…but first, I must go draw a line in the sand….after a steamy, hot cup of green tea.

Two little ducks with feathers in their caps….