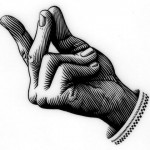 I awoke this morning to a new and exciting sound. It was the sound of my six year old mastering how to snap her fingers together and had clearly spent the better part of her sleeping hours perfecting it before creeping down the hall, into our room and snapping those fingers together at least a dozen times right in my face before I could focus a partially opened, encrusted eye. She was snapping with such enthusiasm that she actually snapped my eye-lid right open and nearly removed all eyelashes on my left eye. The need to snap has caused her some anxiety as of late. If all of the kids in her class are snapping, why can’t she? It’s been a difficult thing to teach her. No amount of discussing can teach a person how to snap. Perhaps she doesn’t yet have the physical strength to snap. Perhaps her hand-eye coordination just isn’t where it needs to be. Perhaps her timing is two milliseconds off. I explained to her that when I was a kid, there was a girl in my class who could belch on command. She tried to teach me to swallow air. Don’t we swallow air all the time? She told me to chug pop. But I wasn’t allowed to drink pop! I admired her abilities and wanted to be like her. I knew one day I would be able to achieve greatness in belching, maybe even be able to belt out the alphabet like I had seen on television. Dare to dream. I told Hanna I was so proud of her for trying something, practicing and never giving up until she finally figured it out. I told her this of course with one hand over my incredibly sore left eye that I was likely going to spend half the day fashioning together some sort of patch for after icing. People will ask what happened to my eye and I’ll have to explain, snapping accident. It will definitely be worth it to see the smile on her face and to hear the sound of her bones rubbing together for the next eight hours straight. Ellie just wanted me to “splash” her blanket on her. A term the girls have used to describe someone, well, splashing a blanket on them.