There’s really no time for writing this weekend as I decided instead to get my hair cut and coloured for the first time since the “Rachel.”

It felt wonderful sitting back, inhaling the fumes from the dye, catching up on some small-town gossip and not worrying (okay, worrying a lot) about how Greg would fare alone with the three girls for the first time. 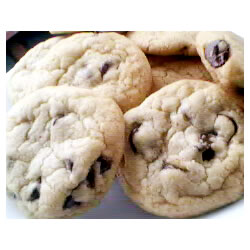 I started reading a magazine about health and beauty and was instantly drawn to a recipe for triple chocolate chip cookies. I guess I forgot the magazine’s title had the word “health” in a pretty prominent place and perhaps shouldn’t have been quite so surprised the triple chocolate chip cookies had little to no chocolate in them and a lot of triple fudging the ingredients. What the recipe did call for however was a can of beans, rinsed and drained. I guess without the rinsing and draining, you might actually taste the beans? Or maybe the secret to the magic beans was somewhere in the rinse cycle, they started to taste like chocolate.

I continued to read but not before I checked to see if two pages were stuck together and to confirm that the year was in fact 2010.

I was quickly reminded of a time a couple of years ago when a family member baked a cake and after having a couple of bites, palate ripe with wonder, I was asked by the chef if I wanted to know the secret ingredient. It turns out, I didn’t.

“It’s tomato soup!” she announced while almost laughing and further, “You can’t even taste it!”

Well now I can and that’s all I can taste…as well as some saltine crackers and maybe even a grilled cheese sandwich.

If you are going to dupe your dinner guests into eating something strange in your recipes, why stop at beans and tomato soup, which by the way, make way more sense as a duet than hidden in sweets. Why not blend up some milkshakes and only after everyone has taken a generous swig, tell them your secret ingredient is bat guano?

I think of those people who avoid desserts for a myriad of reasons, some of them for “health and beauty” and would like to know if a can of beans in their cookies would make them more or less apt to want to indulge.

Do you think someone who refuses a chocolate chip cookie but when told, “there’s beans in them”, quickly changes their mind?

Do you think after having a bite of that same cookie and then being told “there’s beans in them” makes a person more or less inclined to devour the rest? Right. You look for the largest glass of milk (neutralizer) and start chugging.