I was walking through the grocery store yesterday morning, trying to get my footing as I am not yet used to wearing sandals for the season. 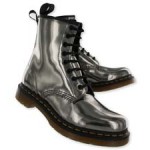 I was instantly reminded of a time in University when my then boyfriend, now husband convinced me to buy Doc Martin boots, assuring me they would be the most comfortable pair of boots I ever owned and he was also able to convince me they were fashionable.

I tried my hardest to wear those boots and having spent a great deal of money, on a student’s income, I wasn’t able to go and buy a second pair of boots so I was stuck, trekking from my rented, basement apartment to the building where I sometimes attended classes. I convinced my classmates the tears streaming down my face resulted from the cold, bitter winter winds and not that my feet had swelled to the size of watermelons and the blisters had burst puss and blood all over my socks.

The pain was unbearable. I went through all of the stages of pain and suffering I had learned in order to cope. Acceptance, deference, kicking, vodka….

With no money to buy new boots, I resorted to using the only thing I knew that would be soft, act as a cushion and absorb the blood. I affixed two extra long, maxi-pads around my ankles, pulled on some tight socks to hold everything in place and wedged my foot into the boots. Problem solved.

Ellie just came to me to ask what the word “literally” means. I explained that I am literally trying to write. She replied, “I get it. I little-league am eating my lunch.”

My only concern moving forward was that I would be invited somewhere that would require me to remove my shoes and everyone would question what the enormous, bulging mass was out the back of my socks.

I didn’t care. I was finally comfortable. Literally.

The Gift of Time…

The Very Hungry Caterpillar…on Tuesday he ate through one camera…