My oldest brother was awarded a medal yesterday upon graduating from a post-graduate degree. My other brother (fifteen months my senior) was in the papers for being named one of the country’s top 40 under 40. My nursing bra burst open at swimming lessons and a pad fell out of the sleeve of my shirt. Am I proud of my siblings? Absolutely. Am I overlooking a potentially neportunistic moment that might evolve from this week’s events? Perhaps.

Ellie was playfully drawing letters, shapes, Arabic sketches on my back that I was to guess, while waiting for Hanna to finish her last Level 6 session. Scratch that. This is apparently just the beginning of Level 6 swimming for Hanna as she will be repeating it in the fall.

My choice in bras is based on one of two options; the one that now looks like someone’s first crocheting project, lacy patterns splitting from so much wear, or, the one in much better shape at the front with the exception of the clasp at the back. It’s the mullet of bras if you will; business in the front, party in the back. For some reason, any other bra I have ever owned can withstand the most ferocious of washing cycles but this one bent in an unfixable way after the first wash. As with most nursing bras, there are two do-hickeys that snap together and both of mine seemed to be more than slightly mangled. You have to be a contortionist to put it on if the baby is on your hip, why not ship this batch off to the stores as is, giggles the manufacturer. 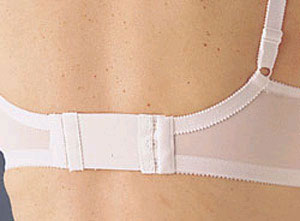 I was willing to risk leaving the house with just one snap somewhat affixed to the attachment as I had done, dozens of times prior to tonight.

My options were limited. Even if I wanted to, there was no way I could elegantly crawl under the “do not cross” steel bar, walk across the deck and cower in the change-room, frantically searching for pliers, a putty knife, super-glue and any amount of duct tape I could get my hands on as I simply couldn’t leave car-seat baby and Ellie alone in the waiting area nor could I ever manage to lift the stroller over the “do not cross” bar to take the baby with me.

I could leave the waiting area the back way, but Ellie was in her bathing suit and would not want to be paraded through the cold hallway of the building while I looped around, hunched forward, hoping my nursing pad wouldn’t pop out, which it did anyway.

I opted for secret option C. Sit still, don’t move. Except I did move. When your child waves, blows you kisses and gives you the thumbs up from their swimming lesson, you wave, blow kisses and thumb them back. I regretted my choice when I felt the nursing pad that was now up around my collarbone work its way out of my shirt and onto the floor.

I could just stare at it and look around quizzically…”what the heck is that?” or I could scramble, bending down, showing off my low-rise waist barely covering my high-rise undies, throw the pad in the bottom of the stroller and continue watching the last session, oh right, the first of many, many level six lessons.

Am I proud of my brothers? You bet. But have any of them invented a decent nursing bra?

No time to write today….need I say more?