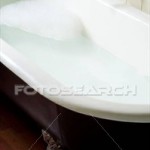 The other night, I begged the family to let me go and have a bubble bath. I wanted to soak in the sudsy warm bubbles while Greg and the girls watched the baby. My six year old and three year old thought it would be AWESOME if they could give me a bath. Only fair, I gave them a bath every day. First, I started with the high bun on the top of my head so as not to get my hair wet. Second, scalding hot water and I let the girls squeeze in my bubbles. I sunk to the bottom of the tub with nothing but my bun sticking out of the water. You can imagine my discontent when a cup filled with nearly boiling water was poured over my head by my six year old who claimed she was going to wash my hair just as I did to them each day. I was in complete shock. Hair soaked, boiling water running into my eyes. All I could do was laugh. Before I had the chance to tell them that I didn’t want my hair washed, I was hit in the face by a flying cup (again filled with boiling water). This time by the youngest who thought her sister’s stunt was so hilarious she couldn’t contain her excitement. I stood straight up to cheers of, “We can see your bum!! HA HA HA” and the bath was over.