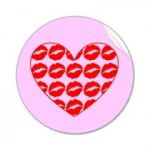 One of my Mommy friends from Hanna’s school let me in on a rather strange and sad grade 1 recess exchange involving my six year old.

Hanna approached this woman, claiming she had accidentally kissed a boy. There was a flurry of activity around her. Buzz from the other students suggesting Hanna had kissed someone, had broken the “hands off” rule had her almost inconsolable on the playground.

I asked Hanna to tell me exactly what happened and reminded myself  that I had likely been spending too much time with the baby and not enough time with her as she had not yet told me about the rather intense situation that led to being utterly humiliated.

“I kissed a boy by accident.” She started crying and grabbed the family room couch pillow, squeezing it into her tummy and then burying her head in it.

As she relayed the events, I knew I was going to laugh but tried my hardest to stay focused.

She was standing against the fence playing house with a couple of her classmates when a boy (I’m not even sure she knew his name until after the smooch) came running backwards towards her group. He was either being chased, running after a ball or simply, running backwards as a six year old boy might be inclined to do.

He didn’t see her, she didn’t see him and her face smacked up against the back of his neck. Thankfully, there were no injuries but the teasing and accusations started flying almost instantly and Hanna had no choice but to turn herself in to the yard duty authorities.

I asked her how she dealt with the trauma and she told me she went to tell two teachers, “to get it over with.”

I probably should have said something loving to comfort her but all I could come up with was, “Well if what you’re saying is true, you didn’t kiss this boy, you were actually necking…..you know, since you hit the back of his neck?”

Stuck in the middle with you…