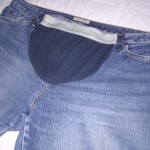 Having had a baby six weeks ago, it’s time to lose some of this extra weight. I think this is the allotted time the general population awards before questioning why you still look five months pregnant and may or may not still be sporting maternity clothes. It also signals the designated waiting period to have sex has been lifted. I guess those are just two of the myths we tell women after delivering a baby. You can never be too careful with that last one. In fact, when I was in labour with our newest little one, a woman called the delivery room nurse and we deduced from her conversation that the woman was thirty-eight weeks pregnant, had engaged in intercourse and was bleeding. She was wondering if she should come to the hospital. In between my most painful contractions as I focused on the one pink corner tile on the floor in the disgusting cubicle I was moaning in, Greg came at me with the questions. “Did you hear that? You can have sex when you’re thirty-eight weeks pregnant?” I forced a breath through my nose to appease the nurse who wanted me to copy her breathing technique so as not to pass out. “Did you also note that she had to call the nurse and potentially be hospitalized for doing it?” I retorted while the veins in my neck pulsated and a tic in my face developed.

The Magic of Writing