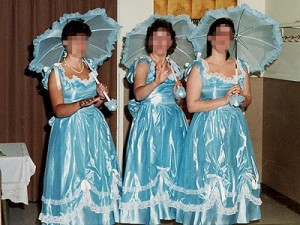 What have I got to lose? I have been selling advertising space for either a real estate publication or lifestyle magazine for the better part of ten years, been married for a decade and have three young daughters. I love everything about my family life and despise everything about my work life. Tired of kissing the asses of local merchants who insist on being called “ceramists” rather than “potters,” discouraged by cold-calling hang-ups despite the “perfect fit factor” for this particular business to gain exposure to their most targeted of markets, exhausted by the lack of stable income this job has dragged me through, confused by the management team’s inability to realize what a great employee I am and yet, they would do nothing to keep me if I threatened resignation. And so, why not take a few minutes and do what brings a smile to my face.

Erin’s bridesmaid dress fiasco wasn’t my only wardrobe malfunction. I was invited by a girlfriend to a stagette/shower for my soon-to-be sister-in-law. Our invitations stipulated that we were to wear our worst bridesmaids dress AND if we had never been a part of a wedding party that we could visit Value Village or Good Will to select a good 80’s off-the-rack show stopper. I decided to go somewhere in the middle, choosing to wear the rose coloured dress from my oldest brother’s wedding that was now 10 years old with a few faded raspberry Durango stains still haunting the crepe material. I chose the dress for a few reasons. While I loved the idea of goofing around and looking silly, it was a crowd I wasn’t familiar with and I wanted to rank somewhere near the bottom of the silly scale while still looking somewhat presentable as we headed to the University bars. Also and most importantly, the dress, now wrinkled in my closet for ten years was a couple of sizes too big. This was of course reason enough for a celebration, as I was smaller than I was prior to birthing two children so the dress was more a statement about my own physical well being. Of course, the back sagged and I wore a beige bra and continually asked the other intoxicated women if my bra was showing which always got a boisterous chuckle and even encouraged a cosmopolitan spit through a penis straw between the teeth of a close friend of the brides.

We separated into various rooms in my girlfriend’s house to get ready for the big unveiling.

A few good belly laughs at everyone’s horrific ensembles and then the bride-to-be’s sister slunk out of the master bedroom wearing it. It was perhaps worse than the frosted lime-green, seran wrapped, suit jacket with plastic butterfly decaling I nearly attempted to try on, only of course to take a picture on my cell phone to send to my friends for a laugh. It was forest green. The kind of forest green that people painted their dens in the 80’s and wore silk, Denver Hayes dress-shirts out of. The taffeta shimmered, there were black lace gloves with fingers cut out stretching up the elbow and attaching themselves to the green material. The skirt tucked, poofed, had several crinolines and stopped just short of the knee where the black lace jumped back on and carried on to fringe out below the calf. The shoulders puffed, the neckline scalloped. So many things wrong, so many styling “don’ts” there was nowhere to begin.

I fell to the ground. I felt I had gotten to know this woman in the couple of hours we had been at the shower and assumed that she wore the dress to be ridiculed as we all had and not in the hopes that someone might suggest she looked good in it even despite having had two children since the wedding she wore it in.

I pointed, sneered, actually used the word “offensive” and went on a tirade that lasted just under ten minutes. The other ladies jumped in from time to time but I was the main heckler.

The bride’s mother who had attended the shower and was planning to leave with others of her generation before the lame naked pin-the-tail on the chip ‘n dale mysteriously popped up, had helped her zip up Frankenstein’s monsters’ dress, set the shoulder pads, stuck around to take pictures of all of the former wannabe brides.

Had my sarcasm finally silenced me? I decided I had a little left to dish out so off we went to scope out the bar scene.

In my head, I thought we would look a bit dorky and might warrant a couple of jeers from the scantily clad teens, but quickly realized that we were the absolute joke of the night. We were the old, mothers, wearing forest green and black lace dresses that no longer fit, thinking we were cool, resisters of the halter top trend, not able to hum along to the lyrics (and I use the word lyrics loosely) to any of the music that was playing. We were has-beens. Two of the women were seven plus months pregnant, so, with zippers half done up at the back, we approached the first line-up of pimply faced tweens. A less than attractive boy told me that he liked my dress, which immediately drew the attention of the single ladies among us. They wanted to carry on some witty banter with the kids in the hopes that they might get a dance out of the night. The boys repeatedly asked how old we were and when I told them I was thirty-two, one responded; “That’s like my mother.” That’s probably the closest thing to the truth he uttered that night in a sea of horny young girls. “And” I went on, “I have two kids.” I knowingly became an even bigger catch with that bonus information.

Of course, when I re-told the story to my husband, I was approached by a young, tall, stud with rock-hard abs (for some reason the wash-board stomach is a sore spot for him) and I didn’t mention the fact that we were booed off the dance floor after my incessant cries to please play some music from the 80’s with words that were coherent so we could practice our break-dancing.

That C.F. in Monaco…