All of the worrying I did yesterday, banging my head on an enormous bag of chocolate almonds before deciding to just eat them was totally unnecessary.

Ellie came home from her first day of grade one happy.

She mentioned the fact that all of her friends from last year were in another class and she was the only one who was separated from the group but hearing it from her perspective, “Mom, isn’t that hilarious?” certainly took the milk chocolate off of my shoulders. Wow. Once again, this child has amazed me.

She explained she met a friend who had also been separated from her group of friends so the two of them hit it off. By hit it off, they visited the backpack cubby together twice and both had sisters. Sometimes that’s all it takes.

The best part of the day though was getting to know another friend with whom she shares a table. When I asked Ellie her friend’s name she told me it was Arm Hair.

“Yeah, his name’s Arm Hair. He’s really nice and we share a table. He had the same pencils and he has a brother and……”

I came to realize, Ellie was trying to say the name Amir but her six year old interpretation and perhaps a soon-to-be-adopted great memory tool had her calling him Arm Hair.

I saw no need to correct her. Two friends in one day, does it get any better?

Another Mom mentioned her daughter had met a new friend playing baseball over the summer. When she asked her daughter the friend’s name, she told her it was “Window….or something like that.”

The Mom had her suspicions, as one might when your child tells you their new friend is named after a piece of glass, could she have meant Willow?

The friend’s name was actually Erin. You know, you open the window to let the air in.

Hanna told me she too had a great day and that her class played a guessing game. Each student was assigned a celebrity and the kids had to guess who they were pretending to be. She was quick to tell me how funny it was when one of her fellow students was pretending to be the President of America, Rocko Obama.

What’s in a name? 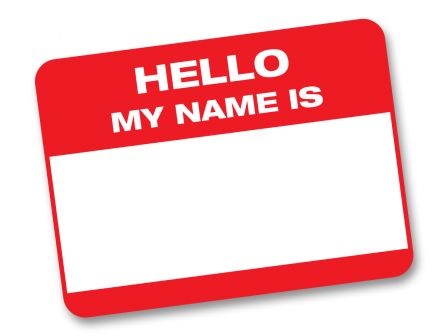 One Of Those Days….