I saw a notice posted on the bulletin board at our school the other day.
“Babysitting Course!” with a bunch of dates and times to sign up.

I noticed it said, “Open to kids ages 11 years and older” and I thought, hey, I have an eleven year old.

Wait. I have an eleven year old.
Let’s just let that sink in for a moment.
I have a kid who is old enough to babysit? Or at the very least, old enough to be in a room with people teaching a course about how to babysit.
This was shocking to me.
Not in a my-babysitting-prayers-have-been-answered kind of way or date-night every Friday–yippee!
It scared me, a lot.
I have an eleven year old who will soon be legally allowed to care for someone else’s kids. To care for her sisters. To care for herself.
Have I done my job as a parent to prepare her for this kind of responsibility?
Then I remembered babysitting at not much older than Hanna is now.
I remember walking into someone’s house who had a newborn baby.
They handed him to me and said, “Okay, something something bottle, something something bed time, something something burp, something something crib.”
Are these people really going to leave me alone with this precious, little guy?
They arrived home at a respectable 3am.
I had pretended to be awake because that’s what a good babysitter does. They force themselves to watch Saturday Night Live and then they surf around hoping there’s an episode of Three’s Company (this was the 80’s) where Jack Tripper gets himself into some hilarious predicament (every episode). But even Mr. Furley’s crazy antics weren’t enough to keep me awake until the sun came up. I don’t think it actually did rise while I was there but it was all pretty blurry. Ultimately, I landed on the channel with that bearded guy who paints landscapes on white canvases in front of a black curtain. I had so much to learn.
Good luck Hanna.
Thank God for Netflix. 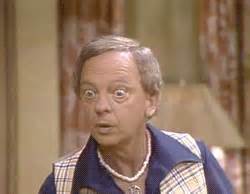 Sit Here For Just A Minute?…

The Day After That…