We have inherited a pet frog.

He is our only pet.

We have no dogs, cats (other than the tens, maybe hundreds, who roam our backyard and moan until another random cat comes and attacks them from behind. That is what’s happening isn’t it?), fish or birds, just one, adorable, never-to-be-touched, frog.

A couple of years ago, we heard a sound coming from behind our outdoor clock.

The sound was almost identical to what you would hear if you were wandering through the monkey exhibit at the zoo.

We all looked at each other and reminded ourselves we were not deep in the Congo but maybe a monkey in captivity had gotten loose and chose our backyard to call his/her home.

The sound was a mix of a loon making a cooing sound but with a rolled tongue, higher pitched and faster. And at the very end of the cooing, was the classic monkey oooh-oooh-aaah-aaah. Picture if you will, me sitting in front of my laptop rolling my tongue and tickling my arm-pits and top of head to really nail this description.

The frog was living behind our clock. Cute.

It turned into a guessing game when guests came over, “Name the animal making that sound?” Then a hilarious party trick when others dropped in.

I have no doubt the frog now living under my couch cushion on my deck is the same little guy.

I found him one day stuck to the side of the lock on our pool. He was suspended seven feet above the patio, hugging the lock. I guess he was hoping for some human contact. I reached around to grab the lock and firmly gripped 2/3rds rubber, 1/3 frog skin. Good trick Kermit.

Then, we noticed him chillin’ on our side door, smack dab in the middle of the window. The kids had a friend over who thought he was so cute she got close enough to talk to him.

Our frog responded by jumping onto her face.

I just realized something. He’s the Frog Prince!

This is starting to make sense. He wanted a kiss. 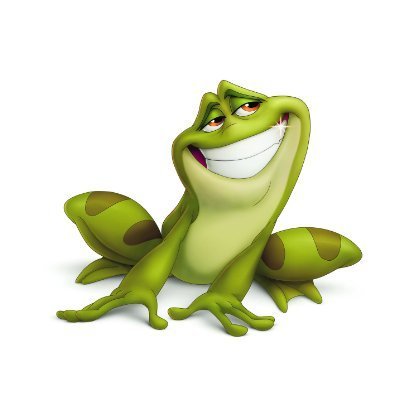 The Day After That…