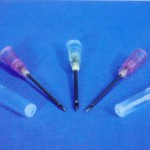 When I got pregnant with Hanna, almost seven years ago, people asked me about my greatest fears. Was it the pain of childbirth? Was it whether this baby would be born with ten fingers and ten toes? Was it that I couldn’t go forty weeks without a glass of red wine?

Of course those were all factors contributing to a lot of worry and unknowns but if I were answering honestly, my biggest fear was how on earth I was going to endure sitting in a Doctor’s office or clinic and get a needle.

I come from a long line of fainters. My oldest brother became a hero in high school when he fainted at an assembly presented by the Red Cross about donating blood. The students thought he had come to school intoxicated and for some reason that made him cool. He never came clean about why he really blacked-out, the thought of getting a needle was simply too much for him to stomach.

The first needle I had to get while pregnant with Hanna was to determine if I was pregnant. I assured the Doctor and the nurse about to administer the shot that there was really no need to go through with this technicality. I knew I was pregnant. I missed my period. I stopped taking my pills. I peed on a stick. I was pregnant. Couldn’t we just get right to the comfy clothes and foot massages?

The second needle was at the five month mark. It was after choking back some syrupy solution that was meant to spike my blood sugar and the results would determine if the baby was at risk of gestational diabetes.

Two things; 1) My mother deprived us of sweets, candies and the one thing banned in our house more than any of those was pop—a syrupy solution that tasted exactly like the concoction I had just been told to chug for breakfast. 2) I was asked to drink the vile, coloured sugar only to sit and stare at the floor while thinking about a needle piercing through my skin and removing my very life blood, literally. Greg was with me in the waiting room, trying to keep me distracted but to no avail. Oh, it was also his birthday. Happy Birthday Greg—barf.

I excused myself from the clinic and made it as far as two store-fronts to the left and chucked orange goo all along the sidewalk.

Then panic set in. If I told the nurse that I had thrown up at fifty-two minutes into the waiting period, they might make me gag down more of the killer kool-aid and wait another hour. I knew mentally, I simply couldn’t do it.

I told no one.

My fear of needles has never subsided but I made it through two births before the incident with my third pregnancy.

Once again, Greg sat twirling his thumbs next to me at a different clinic this time. I had become “known” to the others so I found myself looking for a fresh start.

I typically spent the waiting time trying to chat-up the receptionist and if I was lucky enough, to have a laugh with the nurse who would ultimately be responsible for me living or dying. These people aren’t usually looking for a new BFF, but I certainly was.

I explained that I needed to lie down rather than sit in a chair to have my blood drawn as I am both a fainter and someone who vomits and sometimes, a combo.

I stared at the ceiling and heard Greg cheering me on from outside the cubicle. I did notice a man walk in with a three litre jug of something that must have been urine. What could he possibly have needed to bring in that much for?

When she finished her attempted homicide, the nurse placed her gloved fingers over a piece of cotton and pressed down on the open wound. She told me to place my fingers on the same piece of cotton so she could transcribe whatever details she needed to and probably add a special column about the lunatic on the gurney.

The wheels on her chair were in motion, her body leaning away from me but quickly snapped back when she realized, my fingers were pressing on top of the tips of her gloves and I was holding on with such force she could not release herself.

I think I’m done at three.